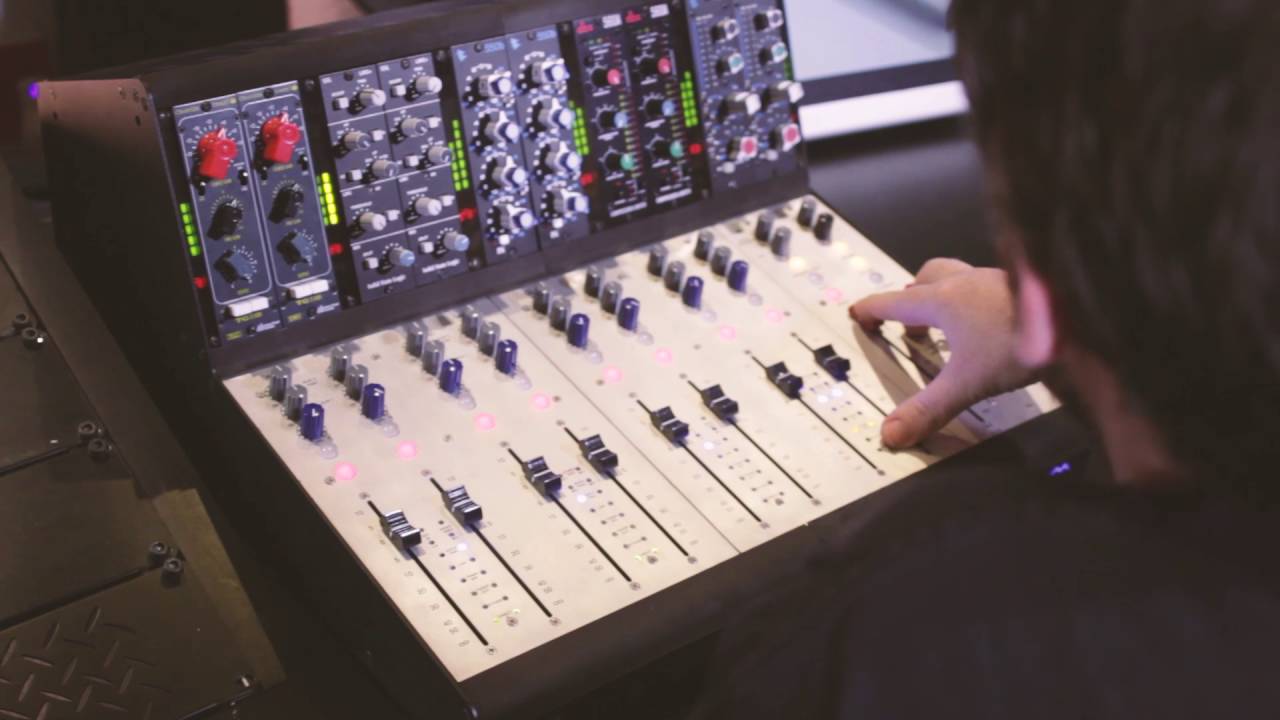 This is Mana It’s a new way to build and configure your own console.

This is the model 510 it’s the new mini mixer from Mana Modular.

It’s a small format mixer that’s been designed to allow the user to configure their console however they need, to get the most out of their analogue and digital equipment, in one small package.

Suitable for recording, mixing, mastering or education, the 510 combines the functionality of a 500 series rack unit, a summing mixer with auxiliary sends and also a mastering grade monitoring section You can than link together up to 4 of the 510, which gives you 32 channel operation The rear panel of the 510 features XLR mic inputs, it also features D-SUB line inputs, the inputs for the summing mixer, the direct outputs and than also the console link connection.

You can connect up to two sets of monitors with separate artist headphone monitoring with also the ability to add an additional module which will give you an ADC DAC converter you can than also connect it up to external monitoring.

The channel section features premium P&G faders. It’s got 2 auxiliary sends as well as the solo and cut functionality.

There is also the assignable soft button which scrolls through the different functions for each channel.

The soft button enables a number of different channel modes and signal flow options for the 510, including a hard wire bypass and the ability to cascade channels in either stereo or in mono.

All of the compressor sidechains can be linked.

One of the key features of the 510 is the ability to switch between a “classic” and a “modern” summing path.

So that’s either current summing, or you can have a voltage summing via Carnhill transformers and a class A mix amp.

The 500 series rack on the master section of the 510 is at a pre fader insert point. We also have the ability via the rear panel of the 510 to patch in other rack gear at this insert point.

The mastering grade monitor section of the 510 features: 4 monitor points, including this 3.5mm jack at the front here you can also see next to that we’ve got the headphone port, which can either run your main mix or also the artists headphone sends, so you can check on what your artist is listening to The other features of the monitor section are summ and difference and mono modes and also a talkback, auto talkback and listen modes.

So as you can see every channel has a LED peak meter. The peak meter on the monitor section has the ability to switch from peak to also the VU metering, there is also an output on the back of the unit to run an analogue VU meter.

As we mentioned earlier, the 510 is a part of a modular studio solution, and there is two more units which are soon to be comming out from Mana. There is also going to be a 508 companion chassis, which is going to be an 8 chanel expansion for the 510, and than we’re also going to have Mana Rack Frame, which will give you the ability to house a Pro Tools Avid Artist Mix, down in this kind of a mixer section, and than up the top a 3RU patch bay, or even a DYI Eurorack synth.

Which is really kind of giving you ultimate flexibility in a console in a kind of small, digital studio environment.

So there you go, that’s the functionality of the 510 mini mixer from Mana.

I think this is a really great product, given that the majority of studios these days are going more and more in the box, and the large scale consoles, although great, require a lot of room and maintenance. Something like this with such a small footprint that gives you that ability to harness the sound of a large analogue console, with such a small footprint, and than also the ability to add 500 series modules to that, giving you just a whole range of sonic pallets in the analogue world. I think there is a really great option for anyone who is looking to expand past the in the box setup.